Warning: "continue" targeting switch is equivalent to "break". Did you mean to use "continue 2"? in /homepages/4/d91125625/htdocs/DOC/mototaxijunket/wp-content/plugins/gravityforms/common.php on line 900

Warning: "continue" targeting switch is equivalent to "break". Did you mean to use "continue 2"? in /homepages/4/d91125625/htdocs/DOC/mototaxijunket/wp-content/plugins/gravityforms/common.php on line 904

Warning: "continue" targeting switch is equivalent to "break". Did you mean to use "continue 2"? in /homepages/4/d91125625/htdocs/DOC/mototaxijunket/wp-content/plugins/gravityforms/common.php on line 924

Warning: "continue" targeting switch is equivalent to "break". Did you mean to use "continue 2"? in /homepages/4/d91125625/htdocs/DOC/mototaxijunket/wp-content/plugins/gravityforms/common.php on line 3994

Warning: "continue" targeting switch is equivalent to "break". Did you mean to use "continue 2"? in /homepages/4/d91125625/htdocs/DOC/mototaxijunket/wp-content/plugins/gravityforms/common.php on line 4000

Warning: "continue" targeting switch is equivalent to "break". Did you mean to use "continue 2"? in /homepages/4/d91125625/htdocs/DOC/mototaxijunket/wp-content/plugins/gravityforms/common.php on line 4012
 About | The Rubber Duckies – Mototaxi Junket 2014

Well, I’ve gone and done it again. I’ve registered for The Mototaxi Junket! 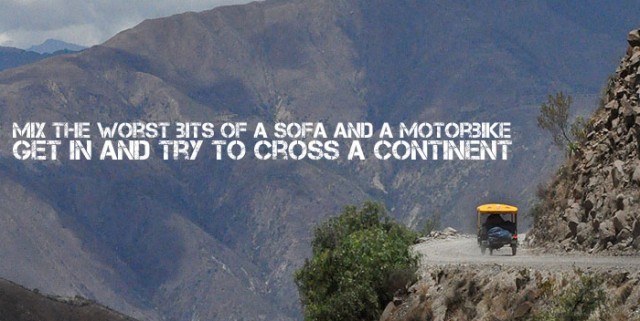 About the Mototaxi Junket

The Mototaxi Junket is a charity rally where teams drive a “mototaxi” the entire length of Peru, from the Pacific coast, through the desert, through a section of the Amazon jungle, and up through the Andes Mountains, ending in the “Sacred Valley” of Urubamba – just north of Machu Picchu. The catch is that the Mototaxi (aka “sofa bike”) is the worst vehicle ever designed. It’s basically a three-wheeled motorcycle where someone cut off the back end and replaced it with a bench. These things are extremely underpowered (try climbing up the Andes with a 125cc engine); the drive chain only connected to the rear left wheel, making these things very hard to handle and always want to turn to the right, and their controls just simply are not user friendly.

It’s put on by a group of crazy Brits called The League of Adventurists, but the junket itself is entirely unsupported — teams receive no help or guidance from the organizers, and can take any route, and as much or as little time as they choose.

As the Adventurists say: “The Mototaxi Junket is rarefied adventuring stupidity in its finest form. Riding the length of Peru in a vehicle so crap it defies belief, the Junket is the pinnacle of adventuring silliness.”

But it is also for a good cause, as every team is required to raise money for charity. Mototaxi Junket teams raise tens of thousands of dollars for a variety of charities, trying to make the world a better place – one stupid adventure at a time.

Here’s a video that sums up the Mototaxi Junket nicely: 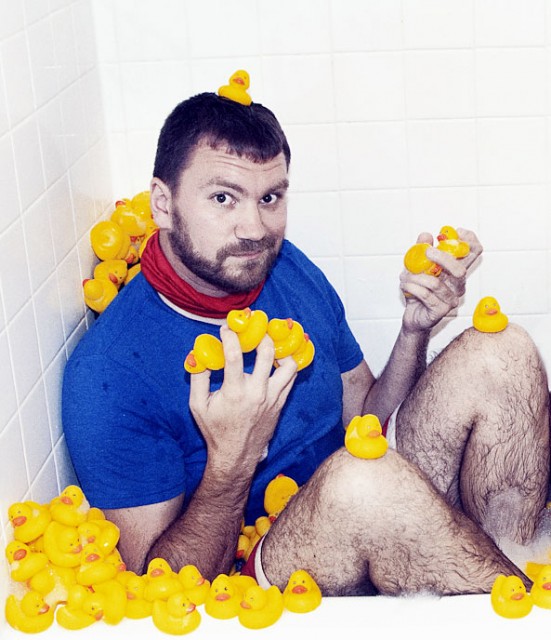 Pete was raised in Upstate New York by a family who makes primitive spearthrowing weapons for a living, and grew up with a taste for adventure. In 2011, he completed the The Mongol Rally, an equally stupid adventure put on by the Adventurists. In 2008, he spent 6 months backpacking through Asia, where he trekked through the Himalayas, visited Mt. Everest, rode a moped the length of Taiwan, and attended the Beijing Olympics. He’s also visited all 50 states, in one year (2013-204). But that doesn’t mean he’s at all qualified to drive from the Amazon to the Andes in a mototaxi…not even in the slightest. He’s probably not even qualified to drive to the local supermarket.

When Pete’s not traveling, he works as a Television Producer on various Reality TV shows – most recently a show about an old farm veterinarian called “The Incredible Dr. Pol.” He also owns his own event planning business called Reality Rush.

Why The Rubber Duckies?

During the Mongol Rally three years ago, we used rubber duckies to help raise charitable donations, and it worked so well that I decided to do it again! Check out our Mongol Rally 2011 website to see what we did last time. 🙂